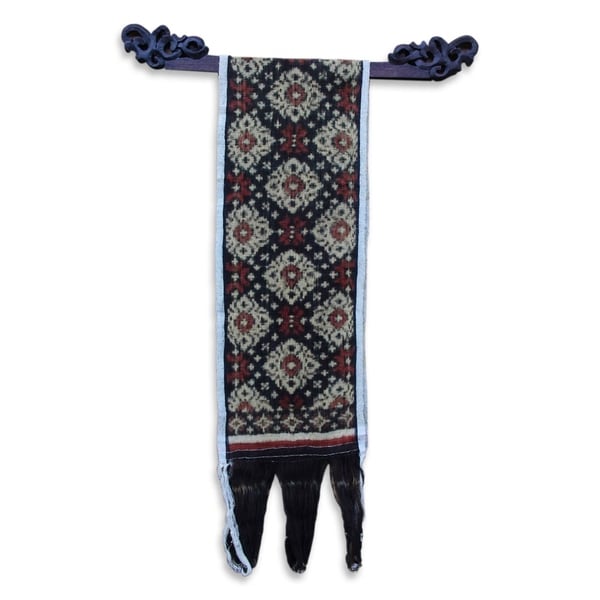 An almost floral cemplong motif expresses itself in a diamond lattice upon this fabulous gerinsing, or Indonesian sarong. Ni Luh Suryati designs the piece as a wall hanging, presented on an exquisitely carved mahogany wood rod. These cloths are believed to hold magical and protective powers, often forming part of the village's ritual costume. This example will display beautifully in any sensitive décor. Suryati presents the wall hanging on a carved mahogany display rod.

Story behind the art :

My name is Ni Luh Suryati and I was born in Bali on April 4, 1980. I learned the intricate process of double ikat weaving and dyeing from Wayan Bawa, my own mother. In creating the double ikat cloth, I am inspired by Balinese tradition, especially Tenganan tradition. In this stronghold of Balinese native traditions (aboriginal, pre-Hindu inhabitants), life is slower, more traditional. People are quieter, friendlier, more dignified. Today, only 180 families, about 400 people live in Tenganan. With very few young people marrying outside the village, there's practically zero population growth.Every endeavor is approached with reverence; dancers, artists, and craftsmen create as if their skill flowed through them directly from God. Religion is life, craft, and art. None exists without the other, and nowhere can this be experienced more clearly than in the many small villages that dot the heart of Bali. Each village has a temple, and religious festivals and rituals are held somewhere on Bali almost continuously. The women of Tenganan, through an intricate process of double ikat weaving and dyeing, create the famous flaming cloth known as kamben geringsing (sarong). This fabric, made from a process found only in Tenganan and two other locales on Earth, supposedly has the power to ward off evil. Ikat means to knot in Indonesian and Malay, and it is a time-consuming process known only to a handful of weavers around the world. Hand-spun cotton is initially dyed an eggshell-yellow hue using the oil of the kemiri nut, before the weaver determines which sections of the thread are to be dyed with what colors. She binds bunches of the fabric together with raffia, creating a tight knot resistant to the dyes in which the piece is to be placed. This process is carried out for each successive color, as the artisan uses natural extracts, such as indigo for the blue tones and root barks for the spectacular vermilion hue. A simple handloom is employed to execute the weave. The finest pieces of the fabric are worn by the people of Tenganan in their many ceremonies. A single piece can take up to five years to complete.